Marco Santini is a violinist and composer.

He first studied at the Conservatory of Fermo and then he graduated with honors and full marks at the prestigious Hochschule für Musik and Darstellende Kunst in Mannheim (Germany). He is rewarded at national and international contests and competitions.

In 2005, in Germany, he founded the Mannheimer Ensemble, a unique string orchestra that gathers young talented artists from all over the world. He currently holds the role of violin concertmaster and he has also performed as soloist in prestigious halls and festivals in Germany, Spain, Greece, Romania, Brazil, Argentina, Uruguay, Russia, United States, Faroe Islands, Lithuania, China, Mongolia, Japan and Australia.

In 2010 he graduated in Pedagogical Music with the highest scores at the Mannheim University.

Marco is very focused and engaged in the classical and educational scene as well as involved and active in jazz and modern music in general. He often cooperates with actors, speakers and songwriters by playing his violin also in several records published in Europe.

In the last few years he has tried his hand at composition his own material that marries classical, world music, jazz and improvisation to invent and create his very authentic, personal genre and signature. Among his compositions we find original themes for strings, symphony orchestra, violin and piano duets and other ensembles. We find pieces with contaminations of modern effects, Irish and oriental influences as well as rearranged classical themes reinterpreted in a completely original style.

His works have been chosen to be soundtracks for theatrical performances, religious representations and television documentaries on Rai2, Rai International, Mediaset and TV2000.

Over the time, he has taken part to several television shows where he has been invited to perform his music live.

For the piece Il Cristo delle Marche stands, he received a letter of appreciations and thanks from Pope Francis who, after having personally listened to the melody, writes:"I bless you, the Christ of the Marches and whoever listens to this song. May the sound of your violin become a praise to the creation".He then also was invited to perform the piece at the Pantheon in Rome in front of the highest offices of the state.

He has received several recognitions, including the honorary citizenship of San Lorenzo of Rosario (Argentina) because of the various cultural activities carried out in favor of the community and the Vallesina Prize because of the way he carries on music as an instrument of entertainment and aggregation between children of different ethnicities. Indeed, he composed 1000 faces 1000 voiceswhich was picked by the Marche Region as the anthem of all the Marche schools; it is translated into different languages ​​and sung in many Italian schools abroad.

In December 2018 his second album VentottoDue is released, dedicated to his first child and named after his date of birth. The album draws inspiration from this unforgettable moment and in a more general meaning, from all those shades of emotions that one feels and acknowledge when life is observed through the eyes of a child. The CD was presented in Italy, Germany, Denmark and soon also in Japan.

In 2019 he received the prestigious Franco Enriquez National Award and Marchigiano of the year awards for his musical activities carried out in Italy and abroad.

The scores of the famous song that struck and excited even Pope Francis are available digitally or in gift box format.
Buy Here

The album was released in 2018 and is dedicated to the first child. It's a rediscovery of the world through the eyes of a child.
Ascolta 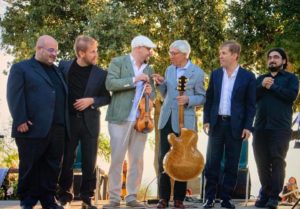 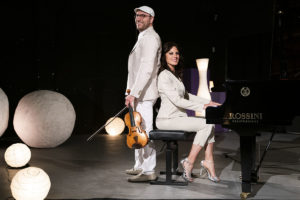